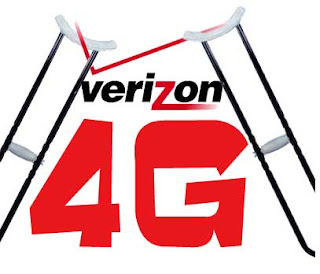 UPDATE: April 28, 2011, 8:22 a.m. EDT - Since Verizon announced over 16 hours ago that they had located the problem, working with engineers to resolve it and would keep us informed on Twitter, they have Tweeted NOTHING.
America's most reliable network? Not anymore. Customer service? Suffering.
If you can't fix it....TELL US WHY?

Talk to us, goddammit!


April 27, 2011, 5:01 p.m. EDT - So, I've had my HTC Thunderbolt 4G phone for one week and for more than a day I've had access at the speed that Fred Flintstone used to have to endure.
Verizon has experienced a 4G nationwide outage, which has also affected their 3G connection for 4G customers. On my blazing fast (?) Thunderbolt I am connected at the pre-3G speed of 1x. Verizon reports that some Thunderbolt owners can still connect on their 3G network, but I haven't heard any reports from customers who say that is the case.
Some Verizon customers have reported that they have no data access at all, or maybe it just seems that way.

I have long been a proponent of Verizon's service (both their network and the efficiency of their support staff). So much so that I've always justified paying more to be on "the most reliable network."

How long will it take before that reputation is severely tarnished. A couple days? A week?

About three hours ago, Verizon Tweeted that they have determined cause of 4G LTE issue and are working with major vendors to restore connections.

If they fix it quick, and it doesn't happen again for a long, long time, they probably won't suffer severe negative consequences. But, as people (read: ME) rely more and more on the computing that can be done from a Smartphone, patience will run thin after a very short time. After all, Verizon is one of the major proponents of me wanting everything FAST!

If you have the Thunderbolt, you may want to try to toggle your phone to 3G only and see if you can connect that way, but it doesn't work for me.

So, at this time the only thing reliable about my new 4G investment is I can still make calls.
And tomorrow, if their system isn't back up and running, I will make one of those calls to Verizon asking what they're going to do for me in return for the inconvenience and mental anguish that their down time has caused me.
Posted by Hooked On Droid - Android News and App Reviews at 5:01:00 PM

Hooked On Droid - tips, tricks and reviews of Android apps

Hooked On Droid - Android News and App Reviews
I've been playing with toys since I was a young child. I like Fiber One bars.